Ubisoft (Formerly known as Ubi Soft until 2003, when the space was dropped) is a french computer and video game publisher operating out of Montreuil-sous-Bois, France. The company has facilities in over 20 countries, most popularly Canada, including development studios in many parts of Montreal and Québec City. Read more of the Ubisoft article. 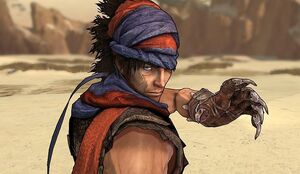 The Prince as seen in the upcoming Prince of Persia (2008). There isn't an article about this game. Maybe you, yes YOU, should create one. Right now. Do it. Fool.

Welcome to Ubipedia
The Ubisoft Wiki that anyone can edit
Made possible with the help of Wikia and the minds behind Dark Vitals Online.

To write a new article, just enter the article title in the box below.

Not sure where to start?

Want your community included? See how!

Community content is available under CC-BY-SA unless otherwise noted.
Advertisement